We're pleased to announce that we have two new fridges dedicated to to preserving all of our camera film products. One is located at our mail order office while the other is in the Sheffield store. This means that whether you are ordering  online or purchasing in store, you can be assured that the film you are buying is of the highest quality.

Why should we store film in cold temperatures? What can you do at home to further preserve your film after purchase? If you have these questions then we've put together a quick guide for you!

Why Store Your Film?

Each one of our products has an expiration date. In reality, a film's expiration date may be shorter if it is preserved inncorectly and may be longer if preserved correctly. As soon as the product is manafactured, film degradation occurs which can have a detrimental effect on the quality of the image: 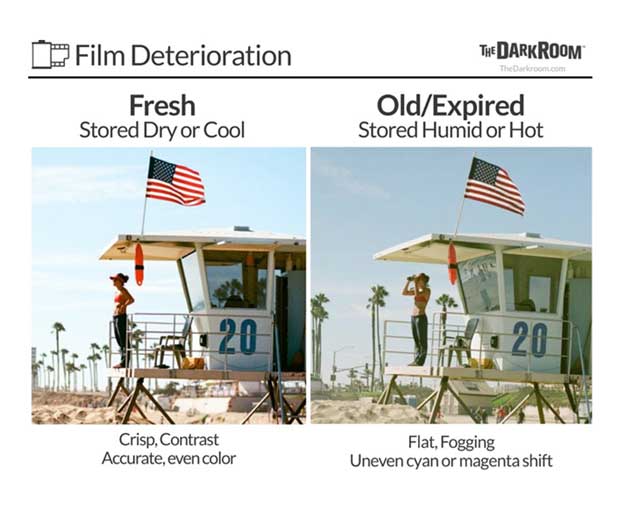 Storing film in cold temperatures (below 13°C) slows down the degradation and preserves the film for a longer duration than if it was left at room or high temperature. Therefore, we've invested in our fridges to ensure our customers recieve the best quality of film possible:

The danger of your film losing quality doesn't cease after you've purchased and returned home. Here are some suggestions to keep your film in tip-top condition:

Put your film in the fridge
That's right, move the milk and the butter to make room for your precious film. Storing it in the fridge will preserve the film for a lot longer than if it was left at room temperature.

Beware of condensation
Don't use your film immediately after taking it out of the fridge or freezer. Instead, take it out and leave it at room temperature the evening before you plan to use it.

Don't leave exposed film roll in the camera when you are finished
Try to use the exact of film roll requried or remember to remove any unused film.

Don't break the seal until you have to
Opening the seal and the original packaging of the product exposes the film to the damaging effects of the humid air. Only open when you know you will use the film.