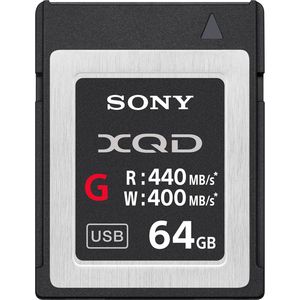 Sony XQD G Series Memory Cards are ideal for continuous raw burst shooting with hi-end DSLRs, letting you capture up to 200 RAW images which is 1.5-times more shots per burst than with Compact Flash cards. Sony’s XQD memory cards are Shockproof, magnet proof, anti-static and resistant to breakage, and offer full performance even in extreme temperatures, under exposure to intense UV light and airport X-rays machines. Designed for prolonged professional use, Sony XQD cards are tested for dependable storage, wherever you need to shoot.

Sony's File Rescue is a powerful tool for recovering damaged or lost data that is simple enough for anyone to use. Applying an advanced algorithm, Sony’s File Rescue realizes a higher rate of recovery for RAW image, MOV files and 4K XAVC-S video files captured on both Sony and Nikon devices. Available as a free download to memory card customers.