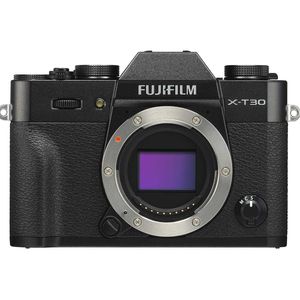 The X-T30 is equipped with a host of new functions, making it a small yet powerful companion for any photographer. It offers outstanding performance, utilizing the 4th Generation image sensor and processor which also includes 26.1 megapixel resolution and fast high-performance AF. In addition, phase detection pixels are now across the entire frame (100%). Other advanced features include a Focus Lever for shifting a focus point easily, a new intuitive touch-screen panel with improved response, and an improved body design that has offers better holding stability to ensure comfortable shooting even with larger lenses.

The AF algorithm has been improved from that used in the renowned FUJIFILM X-T3 to deliver even more advanced AF-tracking performance. This includes enhanced accuracy in face / eye detection and the introduction of a Face Select function to provide priority auto-focus on a selected subject.

This evolution of AF performance is available not only with still photos but also during video filming. Improved exposure stability during face / eye AF and face recognition in the AF-C (continuous AF) mode adds to ease of use. Video performance itself has also been enhanced, offering high-resolution audio recording and smooth 4K/30P video recording.

The X-T30 features the 4th generation image sensor, X Trans CMOS 4, and image processing engine, X Processor 4, to deliver the still photographing performance equivalent to that of the FUJIFILM X-T3. Despite its compact and lightweight body, the camera has 26.1 megapixel resolution, one of the highest among APS-C sensor digital cameras, as well as exceptional low noise performance and outstanding color reproduction. The lowest native sensitivity is ISO 160, previously only available as extended ISO, is now available when shooting RAW. FUJIFILM’s exclusive Film Simulations now include ETERNA mode. This camera also incorporates numerous shooting functions that broaden your ability to customize your pictures, such as “monochrome adjustments” available for ACROS and Monochrome, and “Color Chrome” effect that produces deeper colors and gradations.

Enhanced video functionality. The X-T30 has more advanced 4K/30P video functionality, ability to record high resolution audio without requiring additional equipment and eye tracking functionality during video recording. The X-T30 records in 6K (6240x3510) to produce stunning quality in 4K (3810x2160). The camera also supports the DCI format (17:9), which gives an even more cinematic look to your videos. The Film Simulation modes can be applied not only when shooting stills but also while recording video, including the “ETERNA” motion picture emulator. 4K/30P video can be recorded at 4:2:0 8bit to an SD card. F-log recording and 4:2:2 10bit via the HDMI port capabilities means the camera can record video suitable for more serious videographers