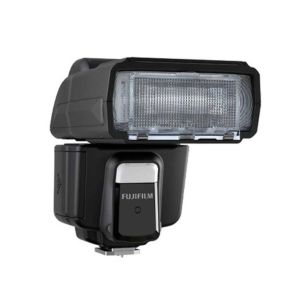 This shoe mount flash has a maximum Guide Number of 60 (ISO100・m and flash coverage setting at 200mm*1) despite its compact form factor. The flash head can be adjusted by 90 degrees upward or by 180 degrees either left or right so that flash light can be bounced off a wall or ceiling to imitate natural light and avoid harsh shadows. The flash coverage ranges from 24mm to 200mm and can be extended to approx. 16mm when the built-in diffuser is used.

The EF-60 features TTL mode which automatically calculates the optimum exposure as well as Manual mode to allow users to adjust the output power themselves. It also supports FP High-Speed Sync, allowing flash synchronization at a shutter speed as fast as 1/8000 sec. thus giving greater freedom when using flash, for example, shooting in bright daylight with the aperture wide open.

The EF-60 has a built-in receiver for the wireless communications system called NAS (Nissin Air System), and when combined with the Wireless Commander EF-W1, or the Nissin Air10s, it can be triggered remotely. This allows you to place this flash anywhere, even outdoors in bright daylight or in a location when obstacles might be blocking line-of-sight.

The EF-60 also features the optical wireless mode. When using the FUJIFILM EF-X500 as the master unit (commander) you are able to create a stable wireless system in environments which have less than optimum  radio communications.

The EF-60 and EF-W1 are compatible with the following models: