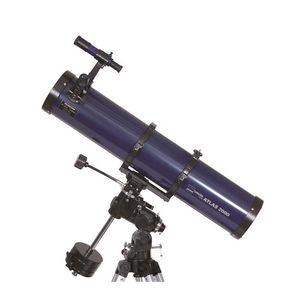 Unfortunately we are currently unable to ship orders into Europe.

Newtonian reflector telescopes are very popular telescopes as they are a simple design and easy to use. The Atlas 2000 Telescope is a classic Newtonian telescope, which comes with a high focal ratio, equatorial mount and a sturdy aluminium tripod. The Atlas telescope will pick out the craters on the moon, features on Mars, the cloud belts on Saturn's disc and deep sky nebulae, depending on atmospheric conditions and light pollution. Other astronomical phenomena can also be seen, with careful observation.

The Danubia Atlas 2000 Astro-scope is a Mirror telescope and comes with a 6x30 finder eyescope, three eyepieces, an achromatic Barlow 2x lens and a moon filter. It has a magnification of 30-238x which can be expanded further by optional eyepieces. (Not Included) and will take a motorised drive for use when tracking stars. (Sold Separately) It also has a photo adapter for added flexibility which is also particularly useful for astro-photography, thereby expanding the telescopes usefulness. The eyepieces included are the K6.3mm giving 142x magnification, the K10mm, which gives 90x magnification and the K25mm for 36x magnification. Danubi offer a 2 year warranty against any manufacturing faults.

"The Atlas 2000 Telescope is a classic Newtonian telescope"

The Atlas telescope is easy to set up and can be aligned to the stars with a bit of careful fine tuning and patience. Usually, telescope images are shown as upside down. This is quite normal and generally isn't an issue, but if it is too annoying, there is an erecting prism, which is sold separately, which can revert the image back to the correct way up. It is always advisable to set up a telescope when there is a clear sky and full moon, as the size of  the moon in the sky, makes it easy to locate through the eyepiece, from then on, a star or planet map can help to locate interesting stars and planets for closer scrutiny. The 'sky is the limit' literally, as there is no end to the pleasure that can be gained from an astronomical telescope.

Unfortunately we are currently unable to ship orders into Europe.