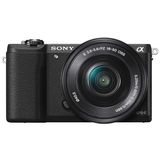 Wi-Fi connectivity allows you to control your camera with a compatible Smartphone or Tablet. Frame an image on your smartphones LCD and simply click the cameras shutter via your device. You can even transfer the images taken directly to your mobile device for quick editing and uploading. Record Full HD 1920 x 1080 video in cinematic 24p, or capture fast action at incredible 60p and 60i frame rates. Made even easier with the A5100’s 179 point AF system – tracking moving subjects is not a problem.

The A5100 is a super compact Mirrorless camera which is about half the size and weight of a typical DSLR yet it has the same size APS-C sensor as most DSLRs. The interchangeable lenses and E-mount system make the A5100 more versatile than almost any other camera on the market. The A5100’s tiltable LCD screen flips up to 180° to make shooting self-portraits as simple as ever. The built-in pop-up flash is perfect for when an extra burst of light is needed to get the shot, the built-in Guide Number 6 flash combines with high ISO sensitivity to enable shooting in just about any setting.