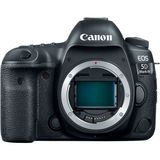 The Canon 5D Mark IV features a 30-megapixel CMOS sensor captures fine detail even in the toughest conditions, with a maximum native sensitivity of ISO 32,000. Shoot Dual Pixel RAW files for post-production adjustments like you’ve never seen before. The Canon 5D Mark IV can shoot continuously at 7fps and its viewfinder and user interface are highly customisable, with intuitive touch-screen operation offering new levels of camera control.  With an expanded 61-point AF system that tracks even the most erratic subjects, and that can be customised to every situation. Accurate exposures come from a metering system so advanced it has its own 150,000-pixel RGB+IR sensor.

Capture 4K footage at 3-fps, from which 8-megapixel still images can be extracted as JPEG files, or explore different timescales with 120fps HD video for slow-motion effects and built-in timer facilities for time-lapse movies. Built-in GPS tags images with your location as you shoot them. IPTC metadata can also be embedded. With in-camera RAW processing it’s easy to produce client-ready JPEGs, and Wi-Fi and NFC connectivity makes it simple to send or share them, using either FTP/FTPS networking facilities or your smartphone. The Canon 5D Mark IV is weather-proofed so is capable of capturing fine detail even in tough conditions.

Why We Love the Canon EOS 5D Mark IV