Are We Heading into a New Era of Camera?

Having just come back from the Sony World Photography Awards in London, I was very interested in Yosuke Aoki’s take on the new Sony Alpha 9 which is due around June time and his amazing talk on the advantages of this new mirrorless camera. He should know his onions as he is the head of Sony Europe and does lots of presentations, some of which are improved by his sudden fall to the floor, to show how sports photographers need to get close and personal.

Now I am as sceptical as the next man when a camera company tells me that they have re-defined the long established norms of camera equipment, but always try to stay open to new ideas and advances in technology. Sony has invested a lot of time an effort in the new camera, so they would, naturally sing its praises, but even I have to admit that the new A9, could well be a game changer.

It’s silent! No I mean, absolutely silent. Press the shutter and nothing happens. Well actually that’s not strictly true, press the button and the camera sorts out the focusing via 693 focusing points, works out the exposure and takes the shot. It certainly took a bit of getting used to, you know, similar to when rear view cameras were fitted into cars, or when iphones could ‘find your friend!!’ as I wasn’t sure that the picture was in the bag, but I checked on the LCD screen and found out that I had got the most amazing shots and lots of them, almost like a video.

Now, you don’t have to keep the camera on continuous mode, which is just as well, as I managed to take about 25 shots in the time it takes to blow the froth off your coffee, but this camera has sports photography clearly in its sights, so the continuous shooting was unbelievably fast and accurate.

Lots and lots of tests have been done by Sony on this technology and they have found that when continuously shooting at 24fps, the lack of a mirror means at there are no blacked out frames and (I’m not sure whether I said earlier) ..................... its silent.

Now, I don’t purport to be a techie by any means, but it would appear to me that the logic is there. The light comes in through the lens, hits the sensor and hey presto, shot captured. Absolutely great if you are inches away from Mark Selby when he is about to play his final shot to win the World Snooker Championships, or if you are standing in a very, very quiet Church just as the bride and groom are about to say ‘I Do’ 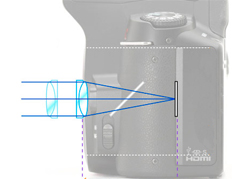 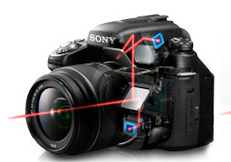