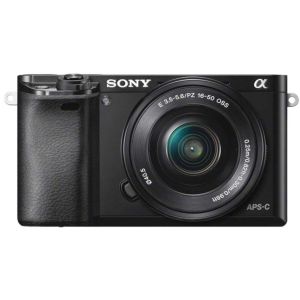 LENS CASHBACK
Purchase and register this camera with Sony and receive £100 off selected lenses. Claim here

Sony A6000 Black Digital Camera with 16-50mm Power Zoom Lens is a super-compact mirrorless camera which is about half the size and weight of a typical DSLR, yet it features the same size APS-C sensor as most DSLRs.

Quicker autofocus than a DSLR

Shoot better with the Sony A6000: 24 MP quality, fast autofocus — and very portable. Add an OLED Tru-Finder, manual controls and a range of lenses, for an enhanced alternative to bulky DSLRs.

The Sony A6000’s Fast Hybrid AF combines the strengths of both phase- and contrast-detection autofocus. With a class-leading 179 phase detection points & a high-speed contrast-detection function, the result is impressive 11 fps burst mode, & highly accurate movement tracking for both stills and video.

The same phase-detection priority ensures fast focusing and smooth tracking when your filming.

A high frames-per-second rate and the superior AF tracking ensures your subject is crisp & clear.

The advanced Fast Hybrid AF enables more scenes to be focused via phase-detection only.

The interchangeable lenses and E-mount system make the Sony A6000 much more versatile than almost any other camera. Produce outstanding detail and enlargements thanks to the newly developed 24.3 megapixel Exmor APS HD CMOS sensor. It has a high resolution than most DSLRs and also adopts the same lens structure as the A7R for ultimate image quality and light sensitivity.

The new BIONZ X image processory reproduces textures and details in real time via extra high-speed processing capabilities which deliver true-to-life images. It allows much greater natural detail, richer tonal gradations, lower noise and more realistic images whether you are shooting stills or video. The Sony A6000 realised 11 frames per second continuous shooting with autofocus tracking by making the most of the wide-area 179 point phase detection AF sensor. Even when dealing with a moving subject, the A6000's excellent moving-subject tracking performance ensures that you get the shot during still or video capturing.

Despite it's small size, the Sony A6000 provides full DSLR control and immediate access to all functions you may require when shooting. Two dials on the top and a rear-mounted control wheel allows the quick selection of shooting modes and camera settings. Wi-Fi connectivity allows you to control your camera with your compatible smartphone or tablet and the Imaging Edge Camera Apps. Frame your shot on your device's LCD, snap the shutter and then transfer the images directly to your mobile device for quick editing and uploading to social networking sites.