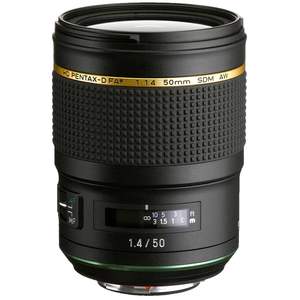 This lens has been developed as a new-generation member of the high-performance Star series — a lineup designed to deliver extra-clear, high-contrast images with edge-to-edge sharpness by compensating various aberrations to a minimum. After conducting an extensive review of the Star-series standards, PENTAX has designed this lens to assure greatly improved resolving power, looking ahead to its use with more advanced, next-generation camera bodies. It provides exceptionally high imaging performance even at open aperture, in addition to a beautiful bokeh (defocus) effect and an outstanding image rendition at close ranges. Developed as the first model of the new-generation Star-series lenses, this large-aperture: standard lens boasts an extra-large F1.4 maximum aperture, useful with many different subjects in a range of applications, including portraiture with an effectively defocused background, and handheld shooting of indoor scenes.

The lens is treated with PENTAX-developed Aero Bright Coating II* — a lens-coating nanotechnology employing a super-low refractive film fabrication process. By coupling this advanced lens coating with the high-grade, multi-layer HD Coating** — which reduces average reflectance in the visible ray spectrum to less than 50% of conventional multi-layer coatings — this lens effectively reduces flare and ghost images to a minimum even in demanding lighting conditions such as backlighting. By incorporating three super-low dispersion glass elements and one aspherical element in its optics, it effectively compensates chromatic and spherical aberrations, and produces brilliant, high-contrast images with edge-to-edge sharpness. Since it minimizes distortion even at a focusing distance of approximately one meter, it produces crisp, distortion-free images over the entire focusing range, from the minimum focusing distance to infinity.

What's in the box.