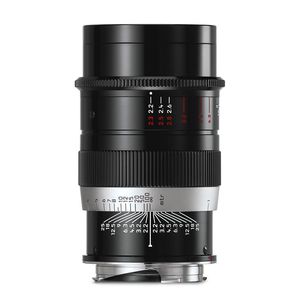 First introduced in the mid-1930s where only about 3000 units were produced, the Leica Thambar M 90mm F2.2 Lens has the same optical design but a modified exterior. The lens still produces the same dreamy and soft focus looks of the original 83-year old lens.

The Thambar’s distinctive, dreamy look and stunning bokeh are created by under-corrected spherical aberrations and features a 20-bladed aperture for the circular rendition of out-of-focus highlights. Thambar comes from the Greek word for 'blurred' and 'out-of-focus' - the original 1930s lens was designed with portraiture in mind. This lens has two aperture scales with one designed to be used when the included centre filter is attached, which further increases the soft-focusing effects.

The new Thambar has almost entirely adopted the design of the original lens – featuring the same proportions, black paint finish and red and white aperture scales as its 1930s predecessor. The red scale applies when the center spot filter is in place, which diminishes the effective aperture of the lens – for example, from 2.2 to 2.3 when wide open. When working without the center spot filter, the white aperture scale is used.

This Thambar Lens comes with a hard case in vintage brown leather which keeps the lens secure and safe when travelling or even for storage. The centre spot filter can be safely stored in the lid of the case. The leather case is designed to closely resemble the original sold more than eighty years ago. The lens hood, filter surround and both lens caps are made of metal. The hood can be attached to the lens back-to-front for compact support. Felt linings inside the hood and front cap protect the metal surfaces from scratches.