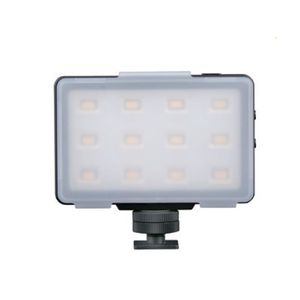 The VL-12S Mini LED Video Light is an ultra-flat continuous light with 12 dimmable LEDs and an incorporated Li-Ion battery, meaning it can be recharged via the USB cable through the PC. Ideal for taking photos and videos with DSLR cameras and camcorders that have a hot-shoe mount, the VL-12S video light is supplied with an optional holder so it can be used on smartphones as well. There are 3 diffuser plates included with the unit that give varying degrees of soft diffused light which are quickly and easily clipped on to the front of the video light. The universal flash shoe has a 1/4" tripod socket for attaching to a tripod head.

The USB charging cable is included and charges the Lithium Ion battery through the PC in approximately 2 hours. Measuring approximately 85 x 75 x 15mm, it is really compact and sits comfortably on the top of the equipment being used.