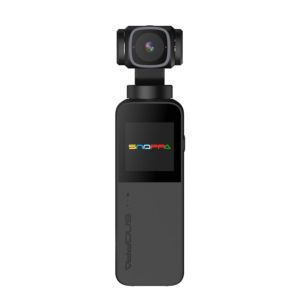 The Benro Snoppa Vmate with its f/2.0 81° wide angle lens is capable of shooting in both 4K at 60fps and 1080p at 240fps in either horizontal or vertical modes. Changing between modes is easy and done in one movement. Gently turning the lens 90 degrees clockwise or counter clockwise is all it takes.

Unlike some other handheld gimbals, the Benro Snoppa Vmate contains a built in Wi-Fi module for connection to your phone, tablet, or other devices. A dedicated Vmateapp allows access to advanced features and modes while allowing you to fine tune your capture settings for the situation you are filming.

The Vmate incorporates a unique audio switching system that lets you use one of Vmate’s two built-in microphones, your smartphone mic, or connect to your Bluetooth mic while instantly syncing the audio to your video clips for unprecedented audio capture.

A perfect tool for vlogging - the Vmate’s unique Broadcaster Mode uses the front - facing camera on your phone and the Vmate’s camera so that you can simultaneously record video of the scenery and yourself at the same time.