The X-T3 is a high performance premium camera that will become an inseparable partner in your artistic journey. Everything about this camera has been designed to completely satisfy all your photography and videoography needs... dials for adjusting exposure settings, high resolution EVF and a robust magnesium alloy body that is ready for the toughest of conditions 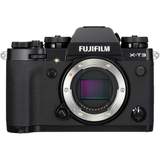 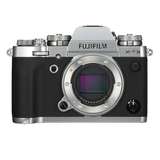 This is the back-illuminated APS-C sensor with more than 4 times the number of phase detection pixels than current models, distributed across the surface. It boasts a high S/N ratio and the lowest sensitivity of ISO160 despite its 26MP resolution. The low-light autofocus limit has also been extended to -3EV, enabling accurate AF even in low light conditions, e.g. scene lit only with candlelight.

This engine has 4 CPU units to achieve image processing speed about 3 times faster than that of current models. Not only boosting AF accuracy and speed substantially, the engine is the world’s first to delivers 4K/60P 10bit output, meeting the needs of professional videographers, in a mirrorless camera equipped with a sensor in the APS-C size or larger. It is also capable of instantaneously handling complex image processing tasks such as FUJIFILM’s unique “Colour Chrome Effect” and “Monochrome Adjustment” function, achieving Warm Black / Cool Black tone in digital, which is adopted as one of the way of expression for monochrome print in silver halide film.

Significant improvement in tracking performance of fast-moving subject: Delivering blackout-free continuous shooting of up to 30 fps while using smooth Live View of 60fps to check your subject. Video performance for professionals: Supporting 4K/60P 4:2:0 10bit internal SD card recording as well as 4K/60P 4:2:2 10bit HDMI output, which can be filmed at the same time. Also, featuring the video-specialized Film Simulation mode “ETERNA,” popular with the X-H1.

Why We Love the Fujifilm XT3