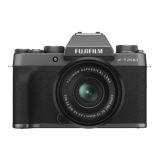 The FUJIFILM X-T200 provides content creators of all levels with a new light-weight and compact mirrorless camera body that features a newly designed EVF, quick face detection AF, the ability to create 24.2MP stills at 8 FPS, and record 4K UHD video. Putting professional-level features at the fingertips of all creatives. The camera has a new sensor and processor combination providing great performance and features a bright, large widescreen LCD vari-angle touchscreen, which gives users familiar and intuitive controls similar to a smartphone. Able to offer “HDR Video,” the X-T200 is also capable of recording 4K30p and Full-HD 120p video. Additionally, the new “electronic stabilization mode” can be used to smoothly record video, enhancing image quality beyond what normal smartphones can provide. The X-T200 is an ideal camera for creative individuals who want to make high-quality videos and images easily and not be frustrated by the technology making them.

Why We Love the Fujifilm X-T200